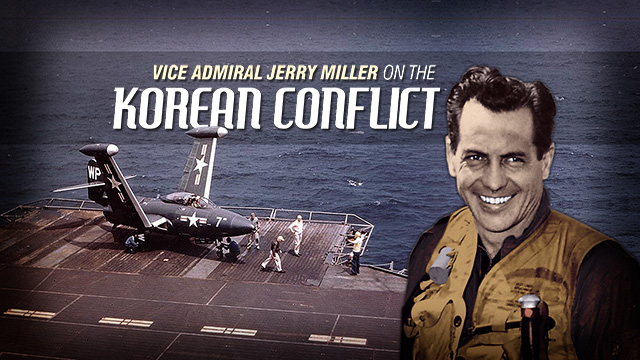 On June 25th 1950, North Korean leader Kim Il-sung ordered the North Korean People's Army across the 38th Parallel initiating the Korean War. Within a day, North Korea's tanks would roll to the perimeter of Seoul, South Korea forcing the evacuation of the government. The invasion was quickly condemned by the UN Security Council and on June 27th, Resolution 83 passed calling for member states to come to the aid of South Korea. On the same day, President Truman committed U.S. Naval and Air power to support the South's efforts to reclaim their lost territory.

Vice Admiral Jerry Miller, then a Lieutenant Commander,was anxious to join the air battle in Korea, having been denied a chance to fight as a pilot in WWII. Miller reveals the challenges of providing air support to the U.S. and UN forces, beaten back to the Pusan Perimeter by the North Korean People’s Army. He also describes the many changing tides of the Korean War: The triumph of the Inchon landings initiated by General MacArthur, the arrival of the Chinese and the bloody stalemate that ensued.

Eventually assigned as Squadron Commander of a jet unit, after amassing a grand total of one hour of jet time, Vice Admiral Jerry Miller would guide his men through training and lead them into battle flying Grumman Panthers. He describes the heavy burden of command, and the tragic price of a war which sometimes left him disillusioned.